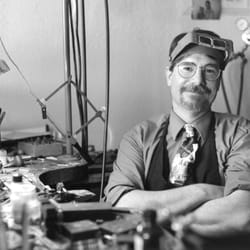 Fox continually seeks to increase his expertise in jewelry and gemology. He became a Graduate Gemologist in 1984 from the Gemological Institute of America. In 2018, he attained the highest level of gemologist possible, worldwide: an American Gem Society Certified Gemologist Appraiser. Throughout his career, Fox has continued to take classes in multiple disciplines of jewelry design and creation. Always learning what’s new, Fox was one of the first adopters of platinum techniques, laser welding and computerized jewelry design.

"As a jewelry maker, my intention is to create wearable, tactile symbols for people to commemorate the large and small events of their lives."