Marta Nelson has been an artist all her life and since 1955, she’s been a prominent advocate for peace. Through her passion for peace, Nelson formed a peace committee and now at 95 years old, she has created an exhibit of hand-made doves and incorporates doves into her paintings. In 1980, Nelson began the longest running weekly figure drawing class in Ojai. Shortly after, Nelson, Gayle Childress and Bert Collins began the Ojai Studio Artists Tour, which has raised over $200,000 in art scholarships! Artists from Ojai and beyond have enjoyed, learned and benefitted by Nelson’s classes and participation in the arts. Thus this group show was born from her students, friends and fellow artists - Celebrating Marta Nelson!

Nelson was a sickly child so she was home a lot, which is when she started drawing. She continued her passion for art all throughout school, studying with all the available teachers. In the post-depression era, Nelson attended Shinard Art School, got married, and still took classes. She says, “I’ve had an extensive education and I’m still learning at this age!”

Nelson first got involved with peace poles in 1955. When a peace poll was taken down, she created a peace pole art exhibit with 7 other artists. She even started her own peace vow, painting a dove in each of her pieces and signing “AFP” after her signature, which means “Artists For Peace.”

Through her passion for peace, Nelson formed a peace committee and has inspired peace in others. In fact, Nelson taught an 11-year-old how to make a paper mâché dove, and now at 94 years old, she has created an exhibit of her own 12 hand-made doves. These will be shown at the Peace Walk Nelson is a part of, where many artists come together to make small art works made of donated cardboard boxes. Marta Nelson is so passionate for peace that she wants to be known as a peace advocate more than an artist but describes herself as a combination of the two.

Lately, Nelson has found it more difficult to create big things. She is currently teaching a watercolor class, and says that “Like many artists, I feel it’s necessary to create – the day isn’t complete without creating.” 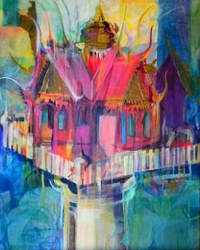 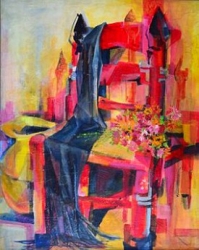 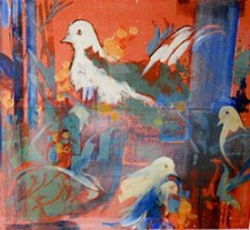